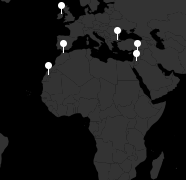 Posted by Marcello Di Cintio on November 19, 2013 in Uncategorized | Leave a comment

I am happy to have been part of an interactive feature on The Guardian‘s webpage. “Walled World” describes, in pictures and texts, many of the world’s walls, fences and border barriers. I wrote about some of these walls in my book – and contributed the section on the Western Sahara to the project – but The Guardian also includes walls in Syria and Brazil, new barriers along Greece’s border with Turkey, and the DMZ between the Koreas. There are some wonderful maps, photos and interviews here, too – a treasure for the fellow walls-obsessed.