Walls in Berlin and Palestine

Posted by Marcello Di Cintio on November 12, 2009 in Uncategorized | 1 Comment 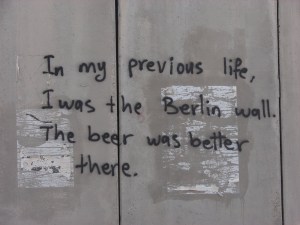 These comparisons were inevitable, of course, and so was the subsequent scoffing of the West Bank Wall’s supporters. There is no comparison, they say. The Berlin Wall was built to imprison East Berliners. Israel’s barrier was built to save innocent lives. They point to the fact that attacks within Israel were greatly reduced since the wall was erected in 2002. The Wall is good, they say.

First of all, the building of the West Bank Wall did not result in the reduction of terrorist attacks in Israel. It coincided with a reduction of violence that was already underway. In the year before the Wall, the Israelis and the Palestinian Authority were already cooperating with intelligence sharing to prevent suicide attacks. Most importantly, key Palestinian groups had already abandoned such attacks as a tactic. The violence was ebbing before the Wall. This is a fact.

Those that have been following this blog know that I’ve seen these things first hand. I’ve come to realize that the Wall is not a ‘security’ barrier. The Wall appropriates Palestinian land for settlement expansion in the West Bank. The Wall disrupts the Palestinian economy by dividing farmers from their fields, or by destroying their orchards altogether. The Wall creates de facto and non-negotiated borders. Rather than create security, the Wall creates the anger and frustration that inspires violence.

This Wall, like the Berlin Wall before it, needs to fall.