Home » Uncategorized » “On Fences and Neighbours” 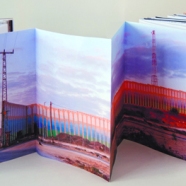 “On Fences and Neighbours”

Posted by Marcello Di Cintio on October 2, 2013 in Uncategorized | Leave a comment

Here is a short excerpt from an essay called “Fences and Neighbours” by Cornell scholar Christine Leuenberger. The essay comes from an accordian-style ‘coffee table book’ called Keep Your Eye on the Wall: Palestinian Landscapes (edited by Olivia Snaije and Mitchell Albert and published by Saqi Books).

I’ve included a photo of the book above. The full text of Leuenberger’s essay, including the footnoted sources, can be found here.

The partition of the West Bank – through the establishment of barriers, no-go areas, and an Israeli road system to which Palestinians have limited access – channels Palestinians and Israelis into separate but often parallel geographical spaces. Israeli law prohibits citizens of Israel from entering Palestinian-controlled areas, and stipulates that Palestinians need special permits to enter Israel or to cross Israeli-controlled areas within the West Bank. These closure mechanisms and policies provide for only a few spaces in which Israelis and Palestinians may still meet. They mainly include potential friction points such as checkpoints.

By 2011, over 522 closure mechanisms existed in the West Bank, including roadblocks, fixed and temporary checkpoints, barrier gates, and crossing terminals into Israel. Many Palestinians must pass through them daily to reach schools, work, and medical facilities, or to attend social functions. These crossing points are some of the few spaces where Palestinians and Israelis may still meet one another. They have become the ‘public stage’ of the conflict, where collectivities, not individuals, face each other; where soldiers with M-16s encounter civic resistance; where Palestinian van drivers and porters, at times, resist the occupation by moving the roadblocks at night; where a Palestinian coffee vendor refuses the request of an Israeli soldier to provide free coffee. They can become sites for potential confrontation. During the Second Intifada, checkpoints became public spaces for violence and hostilities.

The checkpoints “invariably serve to … increase the space, physically and conceptually, between neighbors”. They embody the power imbalance between the sentries and Palestinian civilians. Some Israeli soldiers are said to suffer from “checkpoint syndrome”, sustain psychological damage by being put in a position of power whilst feeling permanently under threat. Palestinian checkpoint crossers complain of humiliation, random violence, and a culture of impunity amongst the soldiers. Conversations between Palestinians and Israelis, shielded from each other by bulletproof glass, are unlikely to increase trust. Instead, technology built for protection helps reinforce the perception of each other as a threat to security and livelihood.

Palestinians and Israelis now meet mainly at potential friction points; but the closure policies have also practically halted cross-border interaction. Some policymakers have long recommended cross-community and trans-border cooperation as a step toward peace, but closures, barriers, and travel restrictions have severely weakened crossborder friendship and professional contacts. After the Wall was built, a Palestinian professor could meet his Israeli colleague solely at a checkpoint – the only space where they could continue to discuss joint projects. Most people, however, don’t go through the trouble. Travel restrictions, permit refusals, and checkpoint delays mean that virtual communication such as e-mail, Skype, and Twitter increasingly substitute for face-to-face meetings. For many Israeli and Palestinian academics, politicians, and peace activists, it is now easier to meet in Turkey, Jordan, or Germany than across the border in each other’s backyard. Spaces in which to discuss peace have become increasingly difficult to come by amongst all the obstacles built to separate and “protect” the two peoples from one other.