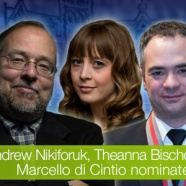 Posted by Marcello Di Cintio on April 22, 2013 in Uncategorized | Leave a comment

Walls: Travels Along the Barricades is now in the running for The City of Calgary W. O. Mitchell Book Prize. The second time I’ve been up for this prize – Poets and Pahlevans was also nominated a few years back – and is another example of the generous support and encouragement I’ve received from Calgary’s cultural community.

Walls  made the cut alongside books by my friends Andrew Nikiforuk and Theanna Bischoff. Here we are in a cheesy, photo-shopped image produced by Beacon News:

Andrew, Theanna and I will be reading from our nominated books on May 14th at the Rose and Crown Pub in Calgary. Join us there, if you can. The Award itself will be handed out at the Calgary Awards on June 12th.

← Some love from the homeland A Humble Plea… →