Home » Uncategorized » From Dubai to Jerusalem 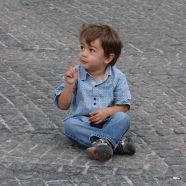 From Dubai to Jerusalem

I am sitting in my hotel room just inside Jaffa Gate in Jerusalem’s Old City. I arrived here a couple of weeks ago with my wife, Moonira, and son, Amedeo. We flew in from Dubai where I was on a magazine assignment and where we spent a week enjoying the gleaming excesses of the city. We splashed around in the Wild Wadi water park, enjoyed all manner of Arabic clichés on a desert safari, and viewed with truly Canadian bewilderment an indoor ski hill. One night, Moonira and I left Amedeo with the hotel babysitter and had dinner in the world’s highest restaurant – 122 floors up – in the world’s tallest building standing over both the world’s highest water fountains and the world’s biggest shopping mall. My ribeye steak cost about a dollar per floor, but being in Dubai means giving in to hyperbole.

Jerusalem, too, is a place of hyperboles. Instead of ‘biggest’ and ‘tallest’ Jerusalem claims ‘holiest’ and, perhaps, ‘most disputed.’ I felt strange coming from there to here. To move from the absurdly grandiose to the profoundly serious. A Canadian filmmaker I met in Dubai told me the best thing about the city is that everyone gets along. Not so in Jerusalem where lines of animosity are drawn not just between Israelis and Palestinian, but between the varying denominations of Christians, Muslims and Jews; between new immigrants and newer immigrants; between the religious and the secular; and between political ideologies. There are no shortage of walls here – metaphorical or otherwise – and no shortage of tragedy.

Of course, Amedeo noticed none of this. He was too excited running around the Old City walls and up and down the Shabbat-quiet rail lines to notice that people here don’t quite get along. And I found it hard to be cynical while chasing a laughing two year-old down ancient stones. That, perhaps, was Amedeo’s greatest gift to me during our time together here: an opportunity to see the city through eyes untainted by hard truth. It was as much a fantasy as an indoor ski hill in the desert, but a welcome one.

Moonira and Amedeo flew to Scotland yesterday morning leaving me alone to prepare for my month-long residency with the Palestine Writing Workshop. I begin on Saturday. The course will focus on writing creative nonfiction, and I am curious to see what sort of stories my Palestinian participants bring forward. Mostly, though, I am excited.