Posted by Marcello Di Cintio on November 11, 2010 in Uncategorized | 1 Comment 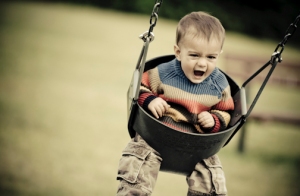 My story about becoming a father appears in the  current issue of Alberta Views Magazine. The piece is easily the most personal story I’ve put to paper. I am sort of proud of it.

The story will appear on the Alberta Views website eventually, but until then, here is a short excerpt (and some photos of my baby boy by James May.)

The downy hair that forms on a baby in utero is called lanugo; the soft spot on its head, the fontanelle. A pregnant woman is called a gravida, and the dark line that appears on her belly and traces a path down from her navel is the linea negra. The moment an expecting mother first senses her child move within her womb is the quickening. The rupture of membranes is the breaking of waters. A child’s final descent into the birth canal is known as the lightening. The cervix ripens. The baby crowns. We call the birth process labour, the same word we use for other strenuous and gainful work. At the end, a child is not extracted or removed but delivered. And when it ends badly, we choose stillborn, a tranquil and sympathetic word, rather than something clinical and cruel.

Poets must have conceived the language of birth. Only they could justify these metaphors, these end-vowels, this rich and musical lexis. For all its lyricism, though, birth’s vocabulary lacks the words for a man who is, or will be, a father.

About a month before my first child was born, I discovered my brother was buried in St. Mary’s Catholic cemetery and that his name was Sandro. I knew my mother miscarried twice before I was born, and I knew both were boys. Until last year, though, she never told me their names or that the Grace Hospital buried Sandro in St. Mary’s. She named the second child Marco but no one granted him a burial. My mother doesn’t want to imagine what the hospital did with him.

My father and the priest at the Italian church arranged a funeral for Sandro. My mother, 20 years old and heartbroken, didn’t attend the service. No one did. She told me Father Lino brought her the tiny crucifix that lay on Sandro’s coffin. She kept the cross but never visited Sandro’s grave. “I couldn’t do it. Maybe one day I’ll go.”

Years later, my mother signed up to sponsor a child from overseas. When she opened the package from World Vision and read the card inside she began to cry. The child chosen for her was named Marco. His birthday was the same day in September of 1969 that Sandro had been due. This Marco was born in Peru and looked like he could’ve been Italian. He could’ve been my mother’s son. “I felt God was telling me that he was taking care of my boys, so I should take care of this one,” she said.

Sandro and Marco died without living, yet I’ve always pictured them slightly older than me. My big brothers. When I was 10, I imagined them in their teens. Sandro would have just turned 40 when my son was born, and that’s how I picture him now. Taller than me and thinner. His hair a little greyer than mine. Since I learned his name I imagine him more often.

I rode my bicycle to St. Mary’s to look for his grave. A woman at the Municipal Cemeteries office gave me the coordinates to his plot—Lot 42, Block 5, Section H—but I found no marker there at all. I called the cemetery office again to ensure I hadn’t made a mistake. A city clerk checked the records and confirmed that Sandro is, in fact, buried in that lot. So are about 20 other babies. Lot 42 and many of the nearby plots are unmarked mass graves for stillborn babies.

“This is what was done in the ’60s,” the woman on the phone said. Then she told me she was sorry. I didn’t know what to expect, but I didn’t expect this. I hung up the phone and surprised myself by crying.

← The Civic Campers The Fence at Friendship Park →