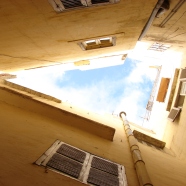 Posted by Marcello Di Cintio on May 5, 2008 in Uncategorized | Leave a comment

Tangier’s reputation intimidated me. The seedy and licentious city the Beats tumbled through in the ’50s had long since become a place travelers were urged to avoid. I read about the muggers and the pickpockets and the dangers of the medina. I was ready to find the worst of Morocco. I came to write a story about the old Anglican church, and would stay only as long as I needed to.

Now I have fallen for the place.

The old medina may be the most interesting in Morocco. It is filled with surprises and sudden revelations. The walls change colour as you walk, turning from white and turquoise, to yellow and rose, to red and yellow. Streets end suddenly in blind corners, or onto four-step stairwells leading to locked wooden doors. I got twisted and lost. I followed pencil-thin corridors and passed beneath balconies that brushed against the houses across the lane. At points, the canopy of walls open up to tiny squares with, say, a perfume shop and a teleboutique. The road is paved here, tiled there, and rises and falls without logic.

There are closet-sized shops filled with used televisions and even smaller stores loaded with old shoes. A woman irons trousers under a single light bulb. Boys play video soccer in a room with three computer terminals. There is the sudden damp scent of shampoo from the public showers, and the noise of a television from a huge cafe with high ceilings that seems impossible here where everything else is so small. There are street signs everywhere, but the shops have no names. Nothing here makes sense. It is exhilarating.

In Tangier, mens’ beards are longer and whiter. The lunatics are louder, clumsier. The woman are more beautiful here, dressed in bright clinging fabrics. And there are people from everywhere. European travelers get their first or last looks of Morocco in Tangier, and they are either wary or weary. Desperate African men pass through on their way to board night-hidden rafts to Spain. They leave their wives here to tend to the children. Often they simply die in the sea. Women from the Rif mountains come with their woven lampshade hats to sell zucchini and tomatoes. There are aging homosexuals hoping for Naked Lunches, while local men kneel with hash pipes in the backs of the cafes. I walk and write. I swim in it all, just on thrill’s edge of drowning.

There is so much to this place, and none of it feels like fear.